Synthetic Oil Vs. Conventional Oil: Which One You Should Go For? 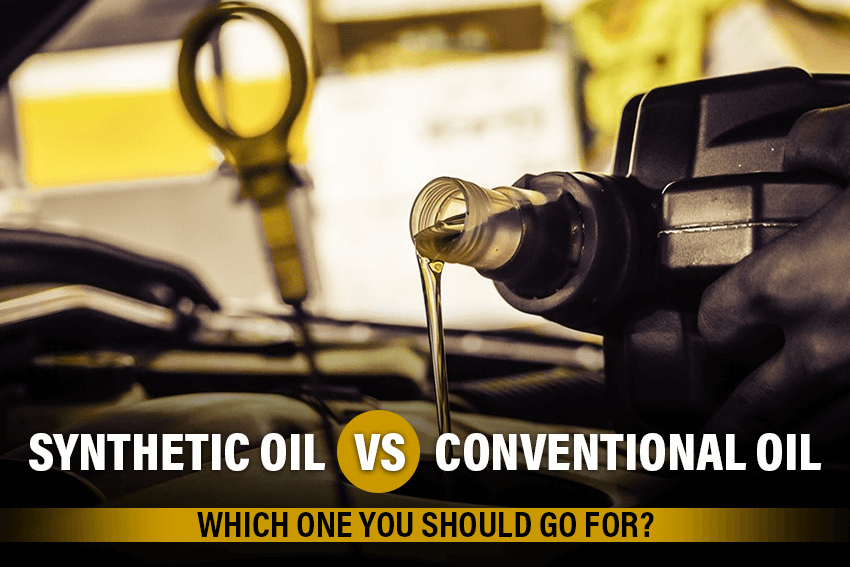 In a price-sensitive market like India, customers are very careful about spending their money. This is especially true when there are cheaper alternatives available of the same product or service. The case in point is the choice between conventional oil and synthetic oil, and whether you should use synthetic oil in your car which is almost two to three times costlier than the conventional one. We explain in detail both these types of oil – after all, the engine is the heart of the car and its maintenance should be your topmost priority.

The similarity between synthetic oil and conventional oil is that both are oils, and hence serve the same purpose of lubricating the engine, reducing the friction, and lowering levels of emissions. Both oils are made by refining the crude oil; however, the major difference between the two is the level of refinement. Although conventional oil (also referred to as mineral oil) is good enough for providing lubrication to the engine, it cannot simply match the overall performance and protection offered by the synthetic oils. This is because synthetic oils are partially man-made and during the process of their production, artificial compounds are added to enhance protection and performance abilities. The production of some of the synthetic oils is so much advanced that even the size of molecules is controlled to suit particular requirements of the engine.

1) Superior engine wear protection: When you drive your car, the various engine parts are in constant touch with each other and the only protective mechanism between these components is the engine oil. Conventional oils are limited in their capacity to protect the engine and after some time, molecules of these oils tend to break down. This decomposition happens even faster when the engine is exposed to extreme conditions, thereby reducing the protecting ability of conventional oils. Synthetic oils, on the other hand, are made up of superior base oil which makes them last longer without undergoing decomposition. This makes sure the engine remains protected for a longer period of time even when subjected to harsh driving conditions.

2) Keeping sludge at bay: You might have heard the term sludge from your car mechanic. It denotes a viscous mixture of liquid and solid impurities. As the oil circulates in the engine, it picks up impurities and over the period of time, this leads to the formation of sludge. Sludge is very harmful to your engine and can dramatically reduce its performance while enhancing emissions. In addition, it will also negatively impact the life of your car. Most of the conventional oils result in sludge formation after some time though synthetic oils owing to fewer impurities in their base grade oil prevent the formation of sludge. In fact, the use of synthetic oil will clear the previously formed sludge, thereby infusing a fresh leaf of life to the car.

3) Better flow at lower temperature: In the extreme cold weather or when your car remains standard for a long time, the engine oil settles down. However, the oil should immediately start circulating once you start the car to provide constant protection to the engine. Synthetic oils are engineered in a way that facilitates quick circulation even after a long break in the driving cycle. Unfortunately, conventional oils are not so agile and take their own sweet time before they start circulating and providing engine protection. This means you remain better assured about the engine’s protection all the time with synthetic oils than conventional oils.

4) Better protection at higher temperature: The conventional oil tends to evaporate when subjected to extremely high temperatures and operating conditions. As these oils are based on average-grade mineral oil, molecules separate, break up, and evaporate, leaving engine vulnerable to damage. Synthetic oils, on the other hand, make sure that the binding between molecules remains intact even at high temperatures which ultimately lead to superior engine protection even at extremely hot weather conditions.

5) Protection to turbocharger: Thanks to the rising environmental concerns, automakers today are manufacturing cars with smaller engines producing higher output thanks to the technology of turbocharging. A turbocharger helps to enhance the performance by stuffing an extra quantity of the fuel-air mixture into the combustion chamber. A turbocharged engine operates at a higher temperature than normal engine and therefore requires superior engine protection. Take, for instance, the temperature of oil inside the turbocharger which could easily exceed 205 degree Celsius or consider the high rate of the shaft inside the turbocharger which spins at around 2,00,000 rpm – both situations demand quick circulation and superior adhesive qualities which only synthetic oils can provide. This explains why most of the turbocharged cars across the globe prefer to use synthetic oils over conventional oils.

Trusted Place to Sell Your Car

Which is your city ?